This was a big day in lots of ways! 42 kms of riding, tunnels, bridges, a variety of scenery, ups and downs, hard surfaces and a long hill. The afternoon was booked up with a session of Curling at the Maniototo International Curling Rink, so we were also on a time limit. It was all great fun though!

It started with a delicious breakfast at Tiger Hill Lodge, a chat and goodbyes to Gwyneth, followed by a leisurely ride on the flat rail trail through Omakau to the sleepy little town of Lauder.

We have friends with this surname in our home town so we had to stop for the obligatory photo shoot and we also had to stop because of the Stationside cafe. (We seem to stop quite often either for coffee or photos but it breaks up the riding and lets the muscles relax for a while).

We were alerted to the fact that after the cafe there were no more food or drinks available for 23kms – however would we cope?  We all enjoyed a home cooked morning tea of date scones and arranged for a made to order salad roll for lunch to take with us so we didn’t starve to death on the trail.

We rode on through the spectacular Poolburn Gorge, over long bridges of engineering genius, one of which was 110 metres and curved to boot!   Two long tunnels under the hills which required our torches and then we were cycling over a very impressive 37 metre high viaduct. The only problem was that the Poolburn viaduct was covered in scaffolding as it was being repaired. Our timing was a bit out for getting photos of this masterpiece unfortunately. We really enjoyed stopping at all the gangers sheds along the way as they usually had history boards and interesting information about the various sections of the trail. It’s all about keeping the history alive.

Lunch was taken along the trail with scenic views looking over the green Ida valley. It was just beautiful!

The trail surface became quite rocky and hard to ride just as the day became quite warm and my legs were starting to tire.

We stopped for our second half of lunch along the trail and met Cory and  Jean for the first time.

They were a mother and son team cycling the trail as a surprise birthday present for Jean. Cory was from Brisbane and Jean a NZ local. We were to come across them again in the next few days.

From Oturehua the final 12kms of the day were the hardest part of the ride for me. It was a long, slow climb to the highest point of the rail trail (618 metres) but after that it was all downhill into the Wedderburn Cottages, our stop for the night.

I must admit to being very happy to arrive. My calf muscles were burning!

The Wedderburn Cottages were delightful, cosy and comfortable with amazing views over the wide open valleys with huge skies.

After a quick freshen up we were collected by George,  a local tour operator, and taken on a tour of nearby Naseby before our pre-booked indoor curling session.

We had no real idea about the sport of curling except what we’d seen on tv during the Winter Olympics. It was fantastic fun! We watched an introductory video first which was very handy and then we were taken onto the ice for a game. The ice rink is the only dedicated curling rink in New Zealand with many teams coming to use it for training throughout the year. In winter the locals use an outside rink on a frozen pond and it’s a sport for all ages.

Here’s a little video of some of the action.

We all thoroughly enjoyed ourselves and the girls took on the boys in a game with the girls being triumphant. It was quite tricky to get the stone to stop in time and the sweeping was only useful if the  stone needed help to keep moving towards the centre of the scoring zone. It’s quite similar in many ways to lawn bowls. I must admit (with due modesty) to being a bit of a natural and my sore muscles and tiredness disappeared as I got into it. If you ever get the chance to go curling I’d highly recommend it.

We enjoyed dinner at the local pub with nearby farming locals and the talk was of more rain to come. As we walked back from the pub the rain started and it rained most of the night.

My trip computer clicked over 112 kms today. After all that activity we all slept very well. 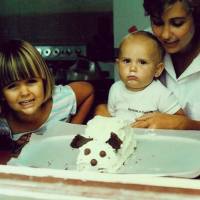 What’s on Your Bookshelf challenge?

What’s on Your Plate?