The Hundertwasser Toilets are one of the most bizarre toilet blocks I think I’ve ever seen.

We missed them the first time.

We drove back up the street and there they were, how on earth had we missed them? Bright, colourful, artistic and brilliant!  Maybe the hundreds of motorcyclists riding up and down the street had something to do with it.

We had left Paihia a short time before on our way to Miranda, to start our Hauraki Rail Trail cycling tour and  had read about this amazing work of art in the form of pubic toilets, in the town of Kawakawa.  So we did what every good tourist does and pulled in for a look, the fact that it was morning tea time also helped with our decision!

Kawakawa is quite a small town and apart from the amazing toilet block and street art, it  has a train line running down the middle of the main street.  Apparently it was once known as Train Town. It was only a short drive south from Paihia, where we’d enjoyed a few days in the Bay of Islands. From Auckland it’s close to a 3 hour drive north to Kawakawa.

We wandered around the main street, visited the artistic toilet block, enjoyed the murals and mosaics along the street and found a cafe to soak up the atmosphere. I loved the quote included on one of the sections of the mural –

When we dream alone it is only a dream but when many dream together it is the beginning of a new reality. Hundertwasser 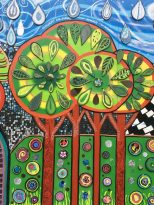 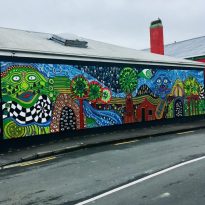 The town is famous for its Hundertwasser toilet block, designed by Austrian artist Friedensreich Hundertwasser, who was a resident of the town from 1975 until his death in 2000.

Driving through Kawakawa, it’s hard not to notice the colourful sculptures, mosaics, copper and cobblestones of the town’s public toilets.

Like nothing you’ve ever seen before, golden orbs perch on the grass tuft roof of this truly unique public washroom. Austrian architect Friedensreich Hundertwasser lived in Kawakawa from the mid 70’s to his death in 2000, and gifted the toilets to the town. Be warned – he didn’t like using straight lines, so this might be one of the most fascinating designs you encounter!

Kawakawa is also the only town in New Zealand that is home to a railway track through the middle of town. Created during the coal mining days, you can take a ride the train today – it’s called the Bay of Islands Vintage Railway. Source

Lots of tourists flock to Kawakawa to visit the toilet block as they are seen as an international work of art! I can confirm that they are fully functioning with both male and female sections, but usually people are keen to inspect the whole block due to their interesting design features. We were entranced with the bright and colourful design.

Of course we took a few photos! 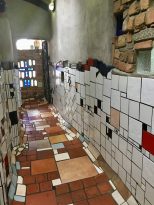 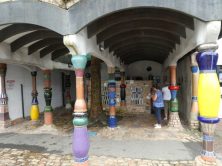 The crazy tiling, the glass bottle walls, the bright colours, the curves, the lack of straight lines – combined with the unexpectedness of it all – really intrigued us.  What do you think?

We travelled to the North Island of New Zealand in November 2017 for three weeks and in November 2016 we spent two weeks in the South Island.  Both islands had their own character and charms and we thoroughly enjoyed our time travelling around.

Have you ever experienced an artistic installation where you least expected to find it? I’d love to hear about it.

It’s one of the best things about travelling I think, the things you see along the way followed closely by the people you meet.

PS. I mentioned this toilet block, in passing, in a recent Sentence a Day post and a regular reader commented that I couldn’t just leave it at that and move on, she wanted more information! So I have written this post to explain the artistic nature of this intriguing place.

You can also find Deb’s World here – come join me.

There no Debbie Downer here on the Deb’s World Podcast!

My Podcast is live on Spotify! 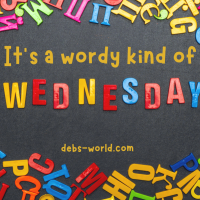 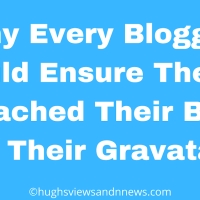 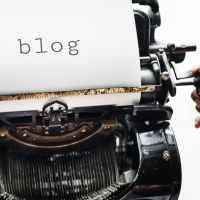 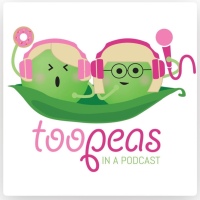