This was another big day starting off with an earthquake in New Zealand’s South Island just after midnight. I can’t say I felt the earth move but I do remember waking and thinking someone was walking around the cottage as there was a real rattle going on. I thought nothing more of it and went back to sleep.

As we watched the early morning news we started getting messages from family and friends at home wondering if we were ok. I received a right royal ticking off from one of my daughters as I hadn’t left an itinerary so no one knew exactly where we were, apart from the obvious, in New Zealand!

We confirmed with family members that we were ok and then our thoughts turned to all those affected.  It’s a sad business and we hope all goes well in the recovery process. 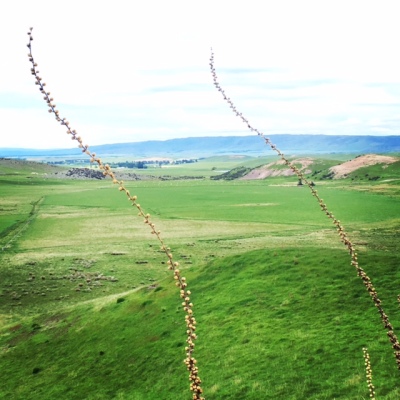 After the rain overnight, the sun came out and we set off after our continental breakfast, leaving our bags with our host for transporting later on. It’s such a great system.

Wedderburn to  Ranfurly was a 13km mainly downhill section. The views towards snow capped mountains and green farmland as we rode along were delightful. We stopped regularly for photos and to read the information boards along the way.

Ranfurly is the Art Deco capital of Otago and had lots of interesting buildings. We stopped for morning tea here and took advantage of free wifi to update our friends back home.

While we were walking around the town we came across a group of ladies setting up a party for a friend’s 100th birthday. The special guest of honour was Prince Charles (well a full size cardboard figure of him sitting in a wheelchair with a tartan rug over his knees anyway).  There was also a real bagpiper (in kilt) ready to pipe the birthday girl into the party and all the ladies were dressed up wearing an assortment of delightful hats.

We decided we couldn’t leave until we saw the birthday girl arrive.  She was fashionably late but managed to walk into the hotel while the bagpiper played and Prince Charles waited to greet her at the top of the steps. It was all happening in Ranfurly with a crowd watching on including us as international guests! 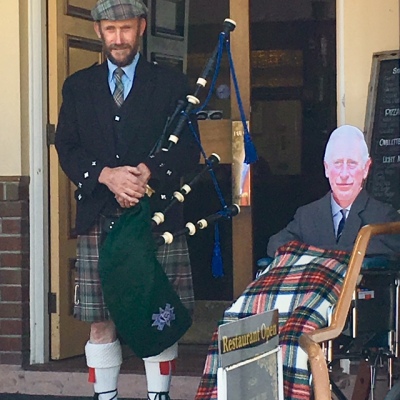 We had stayed far longer than we had intended to so headed off on the next bit of the trail.  We were joined by Jocelyn who was riding from Ranfurly to Middlemarch while her husband drove with Trail Journeys to meet up with her there. We chatted as we rode along and considering she hadn’t ridden a bike in over 40 years she did really well.

We stopped at Waipiata Tavern for lunch as there was nothing available after that until we got into Hyde. The afternoon’s ride took in the Tairi River and the Rock and Pillar Range crossing a stone bridge and going through a final 152m long tunnel. We passed ganger sheds for Kokunga and Tiroiti before arriving in Hyde.

The Hyde School was our accommodation for the night with dinner included. Unfortunately there’s no other food outlets open in Hyde since the hotel/cafe closed down.  We were lucky to make it in before the rain started!

At dinner there were 8 of us – Cory and Jean (see last post) and a lovely young couple Hannah and Eugene who were also riding the rail trail. We had seen them at the curling rink and thought they were in training for a competition but they were novices just like us! We all dined together and were looked after superbly by hosts Tanya and Ross. We all compared notes about our ride so far and it was interesting to hear everyone’s stories

Today’s ride was approximately 46 kms but it was much easier than the previous day’s ride. Or maybe I’m just getting used to it!

So far I’ve kicked over 160 km with my legs holding up ok but I noticed that my arms were very sore – from gripping onto the handlebars I think!

Heavy rain fell overnight with more forecast for the next few days! This was our last full day of riding so it’s nearly all over. It’s been so much fun with great company, delicious food and excellent accommodation.

I’m living life to the fullest and embracing the challenges that come with midlife! I’m now a grandmother as well and I am as happy as a pig in mud. 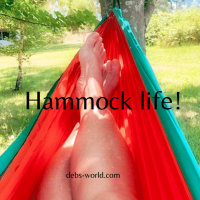 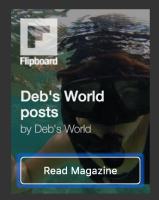